This morning I visited one of my favorite wildlife photography spots – Yarra Bend Park in suburban Melbourne, Australia. It is about 20 minutes from where I live and has a colony of thousands of flying foxes. If you’d like more details about where to find Yarra Bend Park, please see this post.

I was there for about 1 hour and made a wide range of flying fox images. Here are 5 tips for making images of fast moving animals. 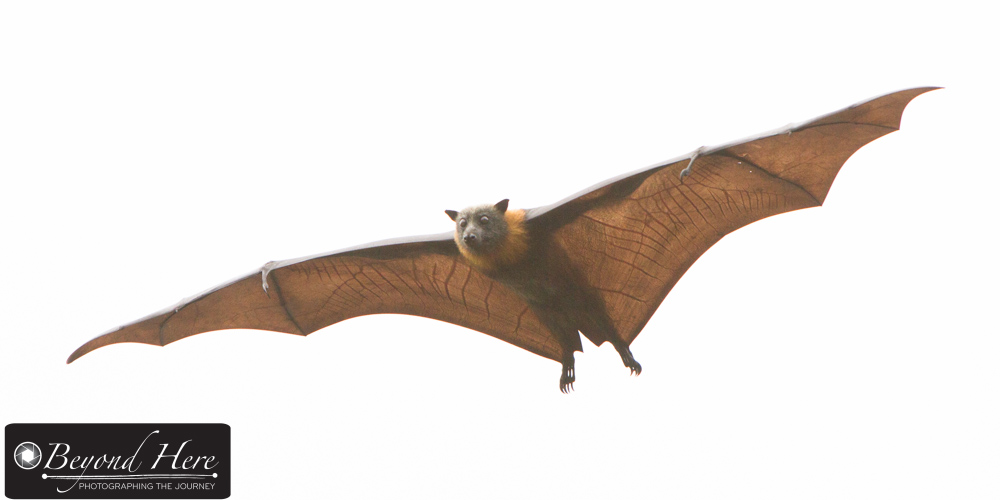 When an animal is moving quickly, getting it in focus is key to a successful image. Use continuous focusing mode on your camera to track the animal as it moves, and to give you the best chance at an image in focus. 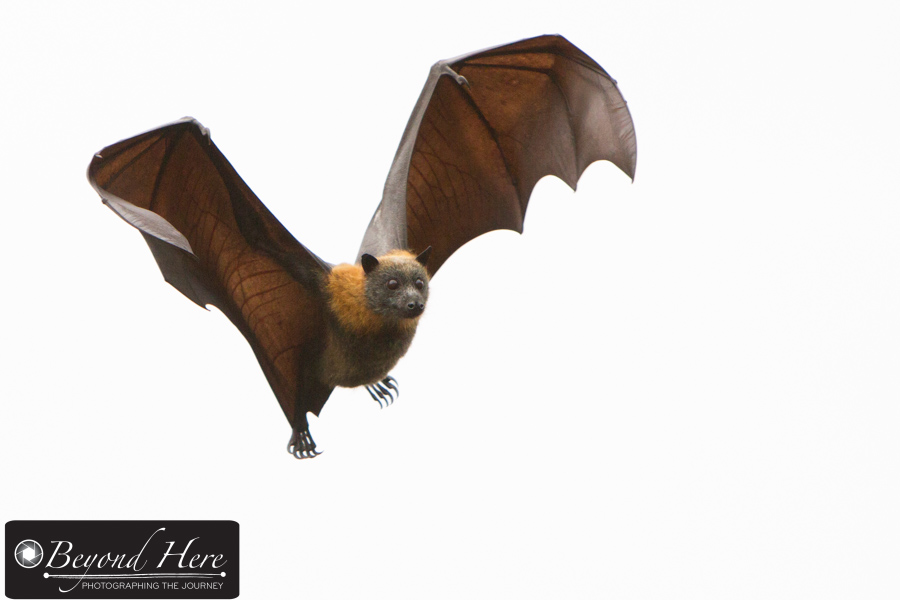 Increase ISO to help with fast shutter speeds. This shot was taken at ISO400.

To allow a fast shutter speed you may need to increase the ISO setting on your camera. In the images posted here the ISO ranged from 400 (for the images shot against the cloudy sky) through to 1250 where I was shooting against a dark green background.

The combination of continuous focusing mode, ISO, and fast shutter speed will give the best chance for sharply focused images. In the flying images here I have used 1/2000s for the majority of these images.

When animals are moving quickly you will have a large number which are out of focus or not well composed. Don’t be upset, this is normal in wildlife photography. You will find that your percentage of good images increases with practice. 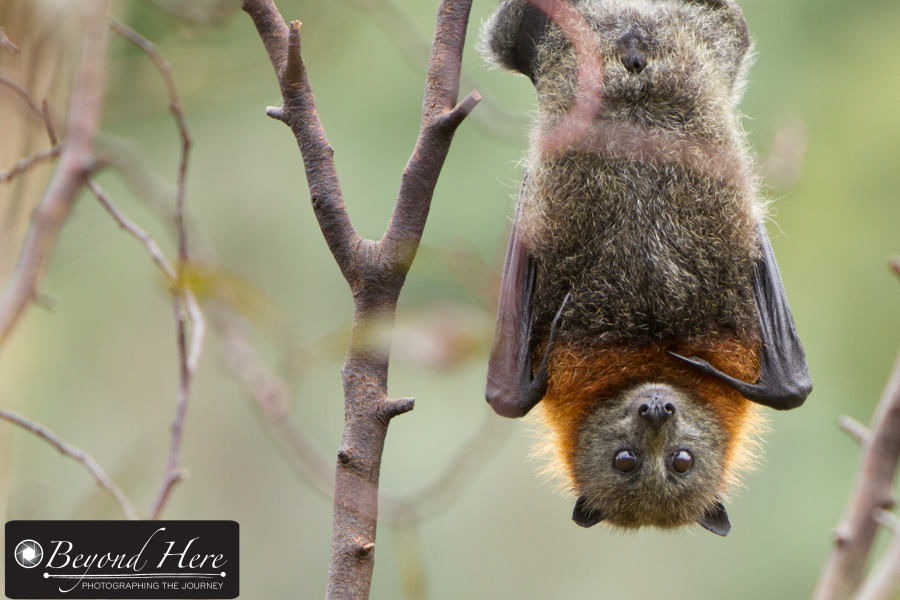 Tip 5 – Look for Strong Images When the Animal Stops

It can be tempting to only shoot the animal as it is moving. Resist this urge, and create some very different images when the animal stops. The flying foxes roost in the trees given an excellent opportunity for images as they hang upside down.

Thanks very much for reading 5 Tips for Making Images of Fast Moving Animals. 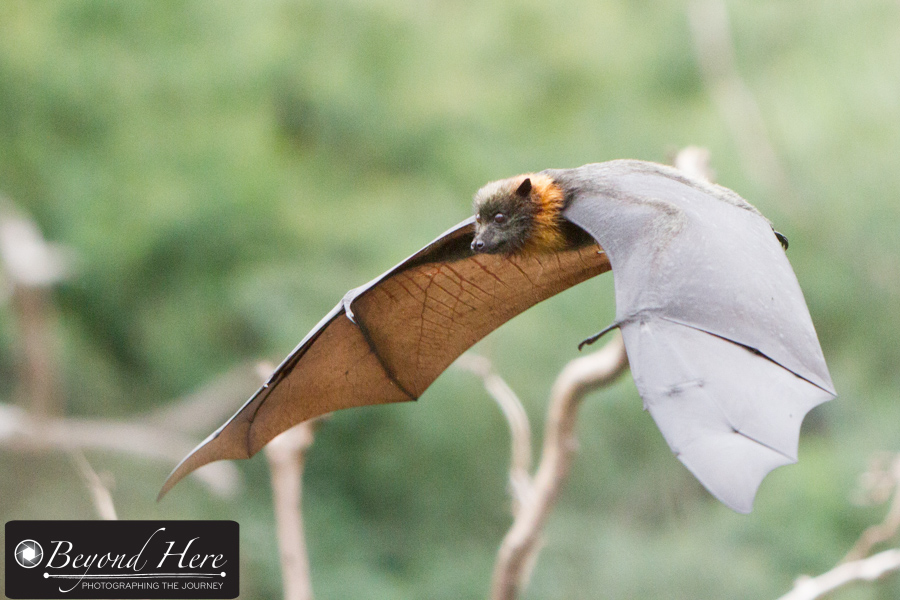 Practice will increase your percentage of successful images.

This post looks at one of my favorite wildlife photography locations – Yarra Bend Park in Melbourne, Australia. 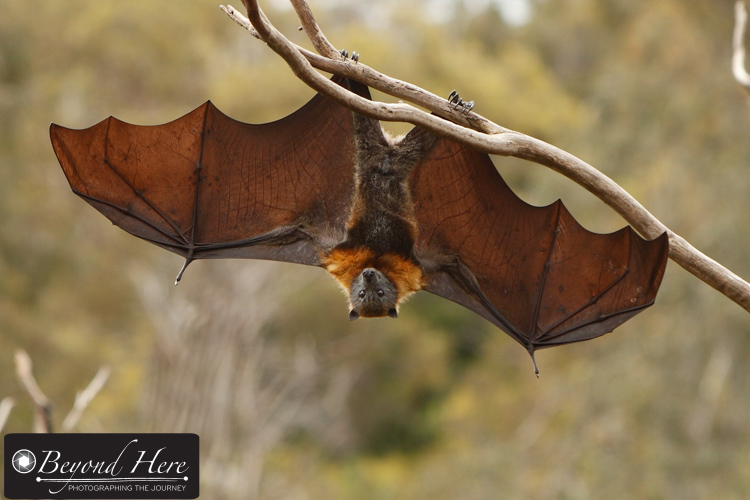 Yarra Bend Park is 4km north east of the Melbourne central business district in the suburb of Kew. If you are familiar with Melbourne, it is also close to Abbotsford, Collingwood, and not too far from Richmond. It is a 260 hectare park, which makes it the largest area of natural bush land close to the city center. In the area are large residential areas, bush land, parks, sporting fields, and golf courses. The Yarra River winds its way right through Yarra Bend Park. The area is popular with cyclists, walkers, mountain bikers, and has a great lookout area which provides views of the sun setting behind the city.

How do I find it?

I first went to Yarra Bend Park in 2008 when I was invited to play golf at the public golf course there. I have since found out that it is well known in Melbourne, but I had not been there before 2008. My round of golf, which I remember being a particularly bad (!), was the first of many trips.

What can I do there?

Actually, more than I realized! I looked up the Parks Victoria website and it shows that you can do walking, jogging, golf, fly fishing, picnic, sports, eat at the restaurant, visit Studley Park boathouse, and see Dight Falls. 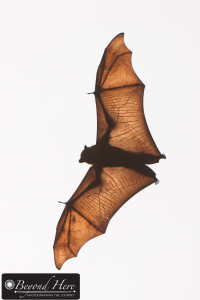 Position yourself to get clear background for your image

But the main thing I go to see are the huge number of grey headed flying foxes. They roost in the trees next to the Yarra River in very large numbers. There are publicly accessible walkways through these areas on one side of the river. You can see them hanging upside down in the trees, sometimes sleeping, sometimes interacting with each other, and now and then keeping an eye on you! If you had a view that bats or flying foxes did nothing during the day, that’s not the case. On most times I’ve visited there is plenty of noise and movement, and it is fairly straightforward to get images of bats in flight. In early summer, October and November, if you look closely you can also see them flying with their babies clinging to their chest.

Grey headed flying foxes are the largest bat in Australia. They have a dark grey body, a light grey head, and reddish-brown fur around their necks. The  adults have an average wing span of 1 meter and can weigh up to 1 kg. They rely on sight to find food, and so they have relatively large eyes for a bat. But the thing that strikes you when you see them at Yarra Bend Park is just how many there are. It’s a huge thriving community of bats!

What Equipment Should I Take? 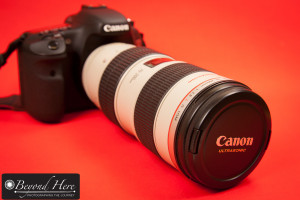 While there are a lot of flying foxes at Yarra Bend Park, they are small animals and will often be some way off in the trees. To get close up images of them, you’ll need at least a 200mm lens. Even better is a 300mm or 400mm lens. (All the images on this post were taken with a 200mm lens.) For camera bodies, I use my Canon 7D for the high burst rate. It is ideal for taking images of these flying foxes in mid air. And I always take several memory cards. It is easy to take plenty of shots in burst mode and I don’t want to run out of memory.

What Types of Shots Can I Get?

Due to the large numbers of animals here, you can get a range of different images. It is possible to get these shots of flying foxes:

How do I Take Shots of Bats in Flight? 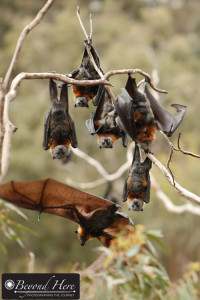 Taking shots of the flying foxes in mid flight is not difficult – particularly as there are so many of them. My suggestions for achieving this shot are to:

Why is Yarra Bend Park a Favorite Wildlife Photography Location?

Yarra Bend Park is one of my favorite wildlife photography spots because:

I’ve always thought that Yarra Bend Park would be a great place to conduct photography tours. If you’d like me to take you there, drop me an email at craig@beyondhere.com.au

Thanks for reading all the way to here! I hope you might think of bats differently now. Yarra Bend Park is one of my favorite wildlife photography locations. 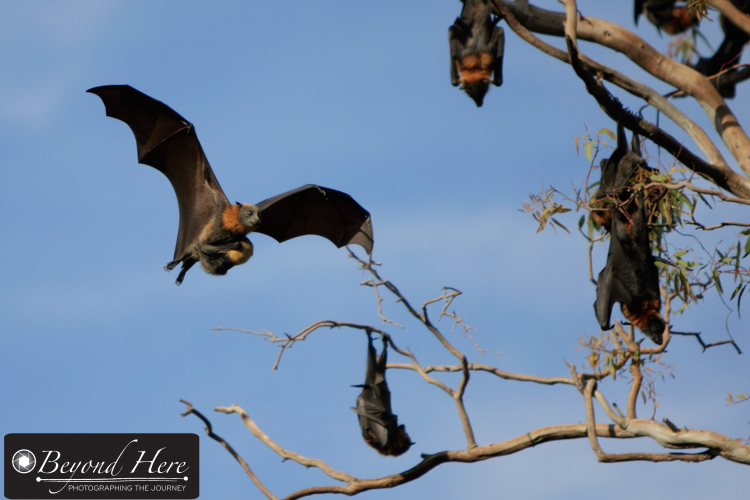 Bat in flight, with baby on its chest

Do you feel like you have to travel to exotic places to create great images?

My commitments in my home town (Melbourne, Australia) forced me to find photography opportunities close to home – and I’m glad they did.

In Melbourne, there are opportunities to shoot architecture, city life, sporting events, city scapes, and lifestyle images. I’ve also found some outstanding wildlife urban wildlife locations, even in a city of 4 million people!

Here are 2 shots from some of my favorite places.

First, there is a large colony of grey headed flying foxes at Yarra Bend – roughly 7 kilometres from the city centre. They are spectacular animals and are relatively easy to photograph. This shot is taken with a 70-200mm lens and a fast shutter speed (1/8000s at f3.5) to freeze the action. I love the way you can see the veins in the wings. Spooky.

Second, at Albert Park Lake, there are cockatoos and corellas which visit year round. This shot was taken next to the golf course – a regular haunt for the cockatoos! Albert Park Lake is just a short walk from the city centre. 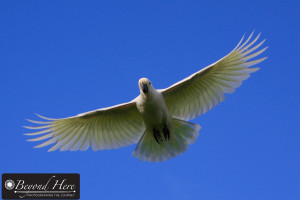 What are the great urban wildlife opportunities close to your home? Please leave a comment, I’d love to hear what opportunities you are finding.